The Southern Gulf Islands are also paradise for walkers. True, only Salt Spring has bus service and it’s not very convenient, but all the islands are small enough for feet to work wonders. Generally the roads are quiet and rural, and in a few cases community-maintained trails will take you part of the way. The ferry service is convenient and has recently been upgraded with sleek, new European-built ships that work great unless you want to have a dart or open a door.

Okay, they’re mostly great. Take Galiano. It is 23.22 square miles, which doesn’t sound like a lot. But the thing is only four miles wide at most, a long bony finger in the Strait of Georgia. It is 17.1 miles long, from north to south. The ferry terminal at Sturdies Bay is in the southeast corner. Exceptionally observant readers will remember that Dionisio Point, the subject of today’s sermon, is in the northeast corner. According to my GPS, the round trip wound up being 33 miles on foot, at least two-thirds of which was on pavement. And while it was by all means mostly level, there were still enough hills to account for 1,800 feet cumulative elevation gain each way. Experienced long-distance backpackers will sneer at this, but it is a solid day’s walk for mortal men with big camping backpacks that have chairs in them.

Formally, Dionisio Point is not accessible by land at all. The BC Parks website, and signs on the island, outright insist that the park is “marine access only.” In fact you can walk and bike in, and even drive a great deal of the way. The route is not advertised, but easy enough to figure out and not much of a secret. And when you arrive on the road, you’ll see that the park has obviously been arranged for future overland use: there’s a sign at the gate, a road leading to the campgrounds, a parking lot.

This is probably one of the premier bike-camping destinations in southwestern Canada. From my perspective there was only one problem, and that’s that biking is stupid. Parking at a closed gate leaves you half an hour to 45 minutes, depending on how direct you want to go, of walking from the campgrounds. But then I’d have had to get my car onto a BC Ferry, an expensive headache, and get a car, and learn how to drive, which were beyond the scope of my weekend ambitions. 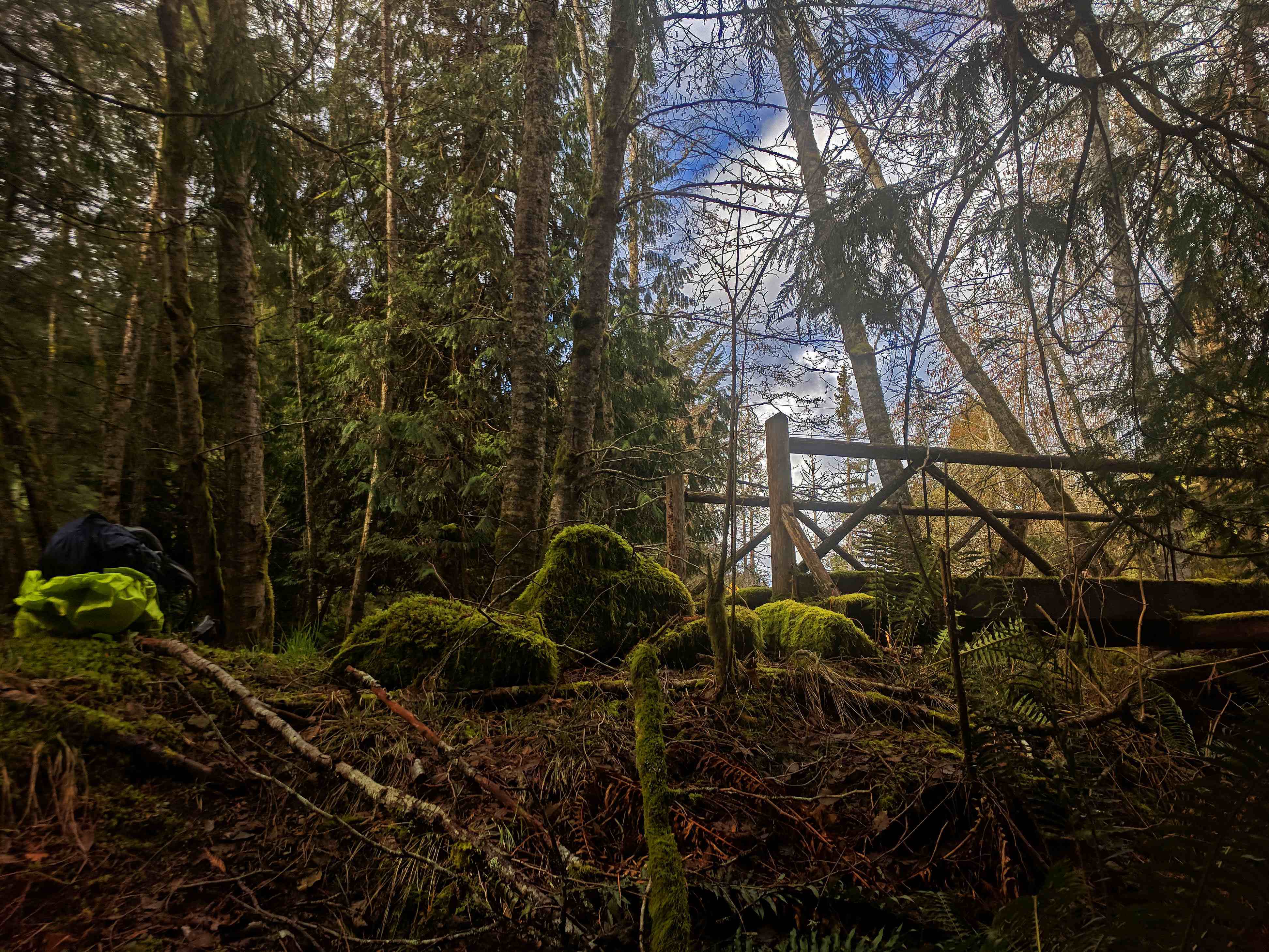 Though it’s a long asphalt walk, it’s very pretty asphalt through an extremely handsome Gulf Island. The local Island Conservancy maintains a modest but good-quality trail network that let you spend the occasional mile with dirt under your feet; I took my lunch halt under a picturesque bridge on the Bell Trail that was exactly what I signed up for. Friendly place, too; despite being a lone, young-ish man with a big backpack and therefore, by conventional wisdom, hitchhiking poison, two people pulled over unprovoked to offer me rides and I didn’t even have my thumb out. This happens quite a bit in the Gulf Islands though, oddly, never when you’re running slightly late for your ferry on the return leg.

But the walk is steady, easy, and agreeable, second-growth trees hanging overhead, birds chirping from the very roadside, interesting stops popping up every few hours2, until one reaches a gate in the middle of the street, steps around, and proceeds down a frequently-walked but little-driven private road. You know it’s private because it says so, many times. A mile or so after that is another gate and a provincial park sign, and soon you’re loping down trails towards the sound of the surf.

You’ve put up with almost 1,000 words already so let’s stop beating around the bush. Dionisio Point is gorgeous. Fabulous sandstone beaches with loads of room at high tide for exploring nooks and crannies and odd, inaccessible islets. An unusual eastern view towards greater Vancouver and the North Shore mountains. Pleasant forested campsites of which the Sandstone Campground’s 15, with ocean views, are the better. Beachside trails well worth a couple hours’ wandering with amazing viewpoints as rewards. Alleged human history with an old Hul’q’umi’num’ village; I say “alleged” only because the only visible remains of the village are a sign and some stumps behind a fence. And should you arrive on a fortunately-clear Saturday in March, as I did, you will somehow have this picturesque peninsula all to yourself. Add in various Conservancy trails and beach accesses on the northern half of Galiano and I wanted another day to explore. In the one morning I did get, I was able to enjoy a fine sunrise and a splendid day. Seals frolicked off the beach. Shipping traffic in the Strait passed, far enough to be romantic. Birds sang. Life was good.

So, flaws? Well, a bit of a pain to get to if you’re bound to the ferry and your feet. This, admittedly, is a minority concern and it helps keep the place special. Life is complicated like that.

Second, in peak season a well provides fresh (untreated) water to thirsty campers. In winter and shoulder seasons the handle is removed by the park operator and other sources are surprisingly hard to find. There is a small stream along the trail by the pass, west beyond the old Indian village, and even in March it did not flow enough to run down the stone beach into the Strait. That was the only source of fresh water I found, though the maps indicate a pond on private property to the south and there are a couple streams of varying quality on the hike up and back.

Third, despite its seclusion the park does have a varmint problem. I mean…

Look. I’ve been playing around it since the opening paragraph. There’s no way for me to tell this story without making myself look stupid, because I am. Raccoons stole my food bag.

Completely my fault. The park’s information boards have many, many, many warnings about the voracious raccoons in the area. But I have an Ursack, one of those bearproof food bags made of Kevlar and testosterone that would surely be too much for ol’ Rocky. I tied it off right, left it on the picnic table with my fragrant items within, and went to sleep. When I woke up the bastard had dragged the whole thing off God knows where.

Okay, I know where, because after ninety minutes tramping around, squinting vainly for tracks, peering into thickets, and generally examining every leaf in conceivable range of a hungry raccoon at 2 AM, I found the thing in dense thicket #698 of 700. A cunning Les Stroud type probably could have tracked the raccoons back to their lair; I didn’t have the game to follow their non-obvious signs so I just had to be persistent. It was never a life-threatening emergency, by any means, but that bag was full of pepperonis, tea, and cheese and Ursacks are expensive. At least I had the consolation of finding many other warrens devoid of my food bag but full of other people’s shredded trash, attesting that I was far from the first victim.

Alone with their bounty, the raccoons had worried apart my knots (another blow to my ego, though I could obviously have been more careful) and scarfed down some pepperonis. But they appeared to lack the taste for Camembert and Earl Grey and, for that matter, most of my sausage. As a result the bulk of the spoils went to the rightful owner. Even so, those bastards! The bag had been pretty heavy for a weekend trip and they’d dragged it a long way. I could have been impressed if I hadn’t been so pissed off.

My apologies, anyhow, to the underpaid park operator who gets to spend the rest of 2018 dealing with pepperoni-maddened vermin.

This was just the bit of adventure that crowned off a fabulous shoulder-season weekend. Dionisio Point is recommended, unreservedly, but if the long drag up island puts you off keep searching. The Gulf Islands are full of little gems like this, some more popular than others, and all accessible and fun even on weekends at the right time of year. Really it’s odd they aren’t more camped-on than they are… but even by the high regional standard, Dionisio is a gem. If the walk to the campsite was as good as the site itself this would bring visitors from around the world.