We all go to nature for different things. Some enjoy the challenge and solitude of attacking difficult places, spending days or weeks reliant on our guts, our abilities, and a few thousand dollars’ worth of ultra-modern, lightweight gear. Most think of a well-groomed drive-up site, maybe in an RV, with water and fuel close-to-hand, and rusticity without labour more intense than driving for a few hours down the backroads and a fight with tent poles.

This is great! Perfect for young children and the infirm, of course, but these places offer scenery, fun, and lifelong memories to anyone with a minimum of trouble (if not expense). You won’t see me defend soulless RV parks with concrete pads, gravel for your incontinent dog, and nary a plant that hasn’t been mowed, but even in those places many patrons are there for a base camp to explore more interesting sites and it’s hardly fair to consider the rest as typical. Most people seek pleasant climes that fits the amount of effort they’re willing to expend, and exposure to nature is an inherent good. Front country has a lot to be said for it.

But not a lot said about it. You ever notice that? If, God forbid, you do want that lousy time sitting in a trailer park you will find a surfeit of guidance, because RVers have disposable income and even those who just park their trailers at a site and wander around need to know where to park. The backcountry side of camping writing is even more massively oversubscribed, including by this very website; thousands of people thinking “if I work this hard enough I’ll get the marks to pay for my four months on the Pacific Crest Trail1.”

We’re left with people who want to experience natural wonder but not a Life-Changing Experience on the West Coast Trail for a week. Many such people are in southwestern British Columbia, Vancouver and Victoria and so forth, and the trails resound with their steps. But your best source for good, vehicle-accessible, but naturally-situated camping in this area is always a governmental website. Being bureaucrats, and therefore category-oriented, they shove everything into two bins. “Front country” and “back country,” and what does that even mean?

Take the Gulf Islands National Park Reserve. This is a vast, beautiful area. Mountaineering aside it will offer every natural experience including nearly a dozen campgrounds.

On the one hand are kayak-only sites like Cabbage Island, with no tent pads, limited to no water, and no access not powered by your own mighty arms driving you through the Strait of Juan de Fuca, at constant risk from the weather and reliant on your skills and preparation to thrive. This is pretty plainly back country. On the other hand we have McDonald Campground, a vehicle-accessible campground just off Victoria’s bustling Highway 17. It’s nestled in the trees and as peaceful as a place resounding with hobos and road traffic can be but if that’s not “front country” the term has no meaning. As always the extreme cases are easy.

The problem is the mushy middle. Shingle Bay campground, on Pender Island, is categorized as “back country” by Parks Canada but is nearly accessible by a car from a public ferry, with parking not even a quarter mile from the campground. Sure, you have to hike down (and then up) a fairly steep hill but it’s on a road, you could probably manage it in a wheelchair if you didn’t have to carry too much. There’s no potable water, no electricity, and the toilet facilities are outhouses, which sound back-country-like. 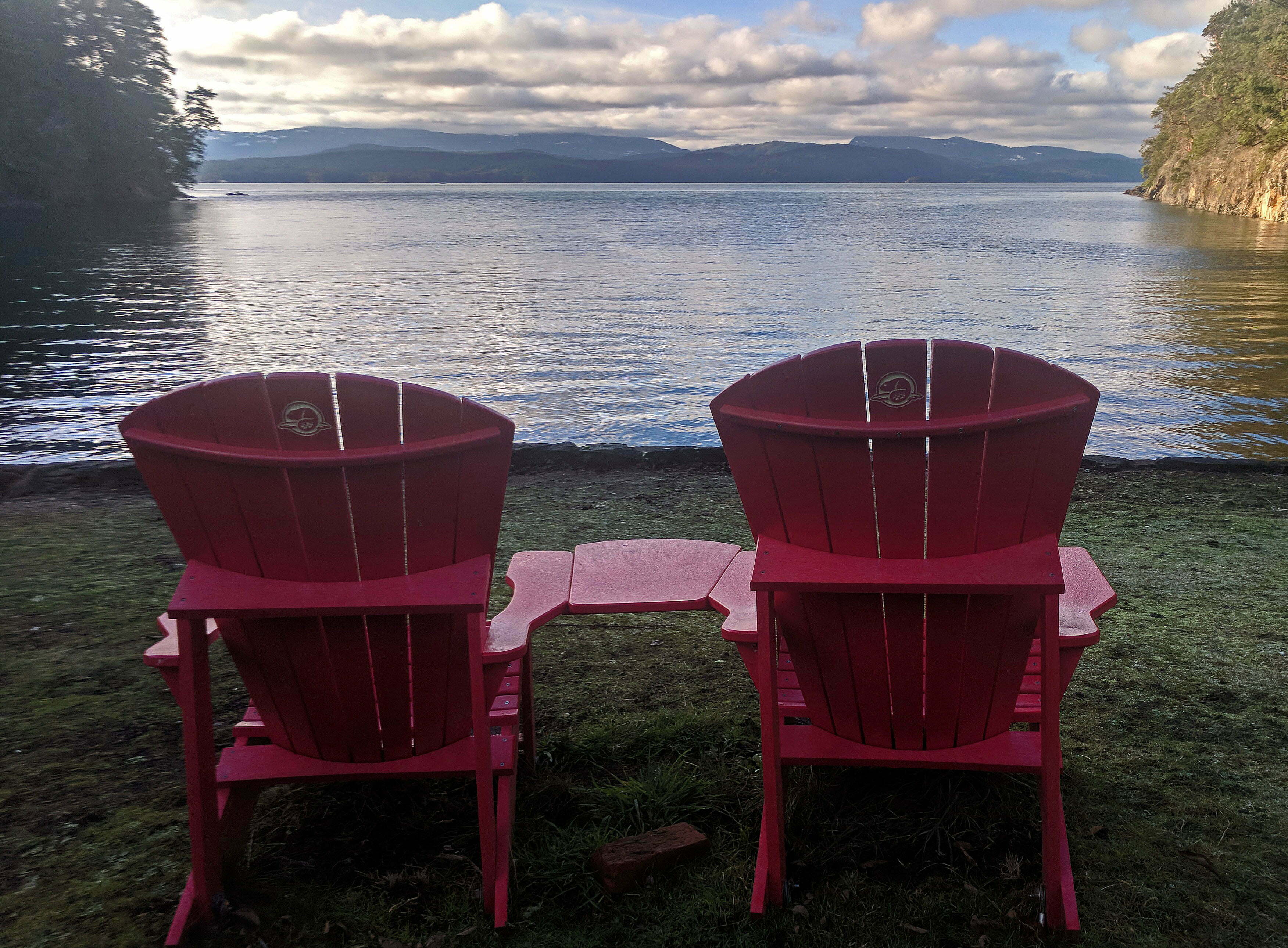 Then look at Sidney Spit campground, on Sidney Island, run by the same people. It allegedly has water taps but they’ve been turned off since the summer of 2018 and weren’t really potable even then. No electricity. No vehicle access; a passenger-only ferry accesses the campground, then the hike is longer and only slightly less hilly than that for Shingle Bay. Shingle Bay is actually easier in an important way, as a seasonal stream adjacent to the campground provides plenty of water with treatment, while Sidney is either dry or saline most of the time. Neither allows campfires, which are prohibited throughout the park including below the high-tide mark. But Sidney Spit is unhesitatingly categorized “front country” by Parks Canada.

The joke is not Parks Canada’s categorization. The joke is that when you arrive there’s a difference! At Shingle Bay you get good backpacking traffic and many local hikers but there’s a limit. The campers are backpackers or bike-packers almost to a man; some traveling heavy to be sure but trusting to their own muscles all the way. Sidney Spit is not like that. Some weekends the wharf for the passenger ferry is full of campers’ dunnage. They set up gazebos and drawing-room tents and for all I know have butlers. They bring soccer balls for the kids to kick around. You’d think that the requirement to pack in all your water would turn people off but not a bit of it; they grab a flat of bottled water or one of those big blue jugs and that’s all you need. It’s unbelievable until you actually see it, the amount of cargo these people drag with such effort, throwing it onto the bow of the little ferry like that’s the most natural thing in the world, and they’re perfectly convinced that they need every ounce.

Sidney Island is worth some effort. There are two short trails, one looping between the camping area and the edge of the spit to the north, where at medium-low tides you can walk out for a mile until you think you can almost touch Coal Island or the American San Juans, and the other heading south through the woods and hooking around to the edge of the island’s salt-water lagoon, offering views of Vancouver Island and the lagoon itself. The lagoon is the dominant scenic feature, which at high tides is a beautiful saline playground for swimmers and frolickers and at the lowest tides is a wide mud flat that you’d swear you could walk across. Beachcombing is first-rate, almost West Coast Trail good. Birders should close this window and make a reservation right now; I have never come closer to a wild bald eagle than I did routinely in two nights on Sidney Island, and that was merely the most spectacular of an chorus of birds-of-prey and songbirds that it takes a far better ornithologist than me to identify. All day, beautiful and distinct species flit through your ears and across your eyes. Walk into the woods or onto the spit, set up a chair, bring your binoculars, and your avian checklist is going to be soaked in ink. If this isn’t the birding capital of British Columbia I would like to know what is. 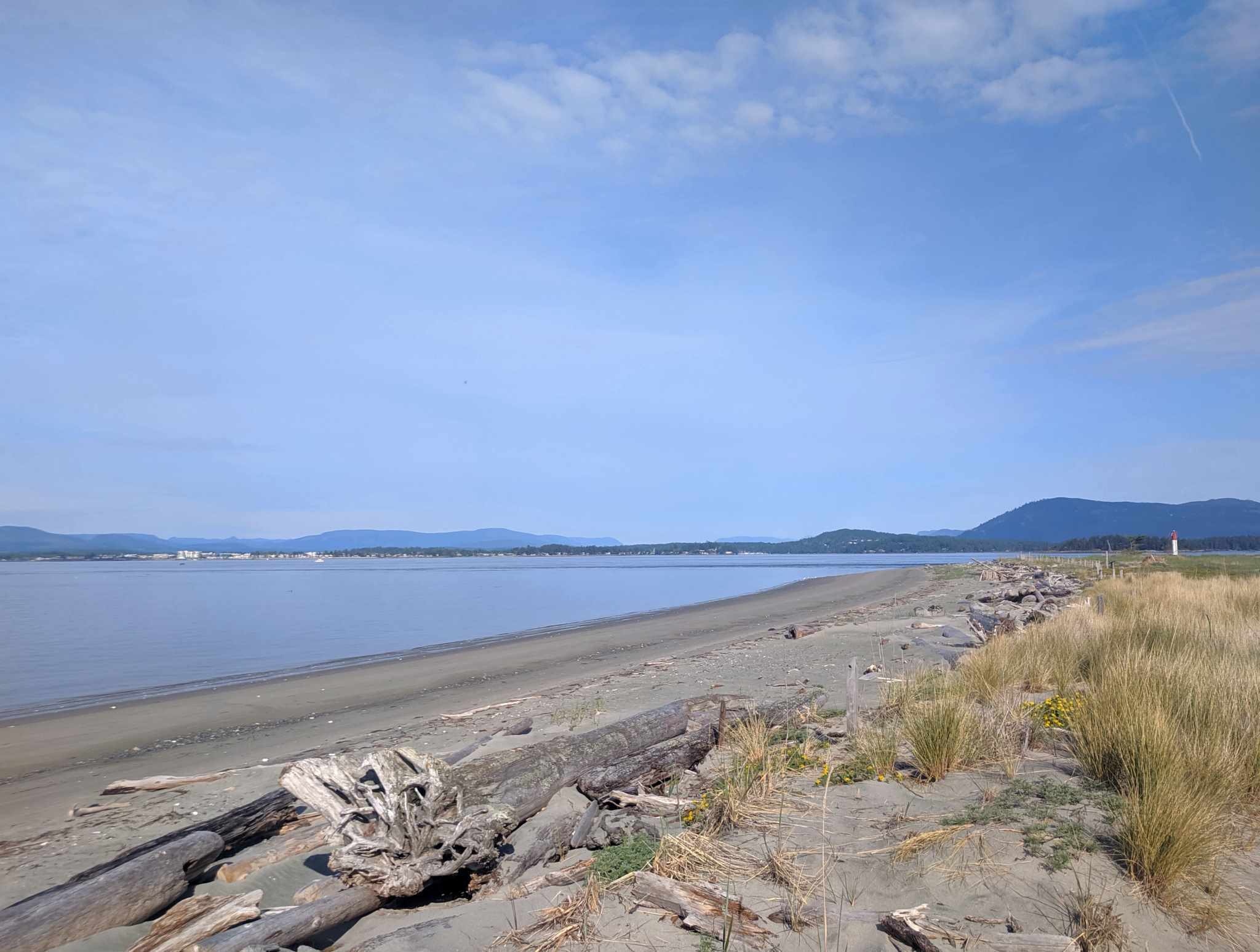 But wait, there’s more. The scenery ranges from good to excellent. And while the park area on Sidney is not too large, the walking is both enjoyable and easy2 with viewpoints as your reward. Even the nuisance point, the intermittent ferry from Sidney to Sidney Island, is compensated by the loveliness of the town of Sidney itself, a pleasant little touristburg that knows exactly what it is, advertising vacant retail space with the I-swear-I-am-not-making-this-up words “sell nice things to hippies and hipsters” on the windows. Both nature and artifice are equally delightful. For the effort, you can’t do a lot better.

Yet why do you get one crowd to Sidney Island and another to allegedly “back country” campgrounds that are no harder to reach? On Sidney Island the paths between campsites are mowed and every intersection has a map; Pender Island is not mowed but the tent pads are obvious enough, there aren’t enough paths to get lost on, and there’s an orchard. Is it as simple as the fact that Sidney Island provides wheelbarrows for visitors to move their goods from dock to campsite, and Pender Island does not?

I really think that’s it. It’s those little things, the wheelbarrows and the marketing, that determines whether mom and dad will decide it’s the right spot to bring Brédolyn and seven coolers of milk and all their worldly goods. Tell somebody that a place is appropriate for the family and that they can easily tote their microwave to the site and they’ll believe you, even if they have to tent and pack in all their own water and poop in a hole. Tell somebody that a place is in the back country and, lacking experience to the contrary, they’ll believe that too.

It’s an odd responsibility to place on the guys creating the websites for provincial and national parks, who probably never dreamed they’d have to take it on.