On one trip I combined “covid panic” and “Ben you fucking moron,” nicely spraining my ankle on the Norvan Falls trail of all the ridiculous places, a simple enough hike I know as well as kiss-my-hand, when just after the final bridge before the falls I stepped of to responsibly social-distance from a nice old lady passing the other way and landed wrong2. I hiked out, denying myself even a free helicopter ride, but it rather laid me up, as did my aggravating it on a run without a brace because have we established I’m an idiot?

My experience in Garibaldi last year put me off the ultra-crowded provincial parks in Sea-to-Sky Country, but the pandemic opened an opportunity. Supposedly because of the need for social distancing, BC Parks is currently requiring free day use passes for six of the most popular provincial parks, including Stawamus Chief.

For hikers Stawamus Chief is mostly seen as a day destination, and the 52 vehicle-accessible, 57 walk-in campsites (all first-come-first-served) in a teeny-tiny camping area adjacent to Highway 99 with the main trail running through the heart of it don’t sound inviting. Actually they’re lovely. On a beautiful BC Day long weekend there were a few walk-in sites available every day and even a couple drive-up ones, though you would have needed a motorcycle and a tiny tent to fit onto the pad. Things got noisy-ish on the car side but a screen of trees generally let peace reign. The walk-in side is much preferred by climbers getting up at dawn and returning at dusk, and while the sites are a bit crowded there’s enough tree coverage and brush to allow for some privacy. The highway itself, give-or-take sirens and street racers, is muted. Access is convenient, with either an annoying but safe highway-side walk from town or a minute stroll from the Sea to Sky Gondola, both served by the affordable Squamish Connector private bus. Camping gives you not just a night under the stars, with mountaineers literally overhead, but opens up a convenient dawn walk to Shannon Falls, a front-country destination that is teeming with hordes most hours of the day but is well worth a look if you can get it to yourself, or side-trips down the Apron Trail to see how the climbers live in a park that may have been put on earth by God for their pleasure.

The day-pass system was the only catch. The Parks website tells us “overnight campers at Stawamus Chief Campground must have reserved a day-use pass for date of entry.” Maybe so, but you don’t pass the checkpoint to get there. As a result, not only was the day use permit I got for my date of entry not checked, but I had to pull out my phone inside my tent the next morning to try for another permit to actually hike the Chief. By 6:03 AM on a beautiful, long-weekend Saturday the permits for morning hikes were gone, and those for the evening were “limited availability.” Imagine getting up there and not being able to hike. If the campsite was actually within the permit barrier,and your day-use pass covered you for however many nights you bought at $10 a pop, or your camping permit itself got you up the hill, things would be better for the camper, though with other complications. In such crowded parks a regulated day use system has a value that goes way beyond a pandemic. It’s worth thinking about how to get it right long-term.

Fortunately I did get my afternoon reservation with the Chief so, with one of my pains done away with, I wrapped the other in a stout ankle brace and went up-hill. 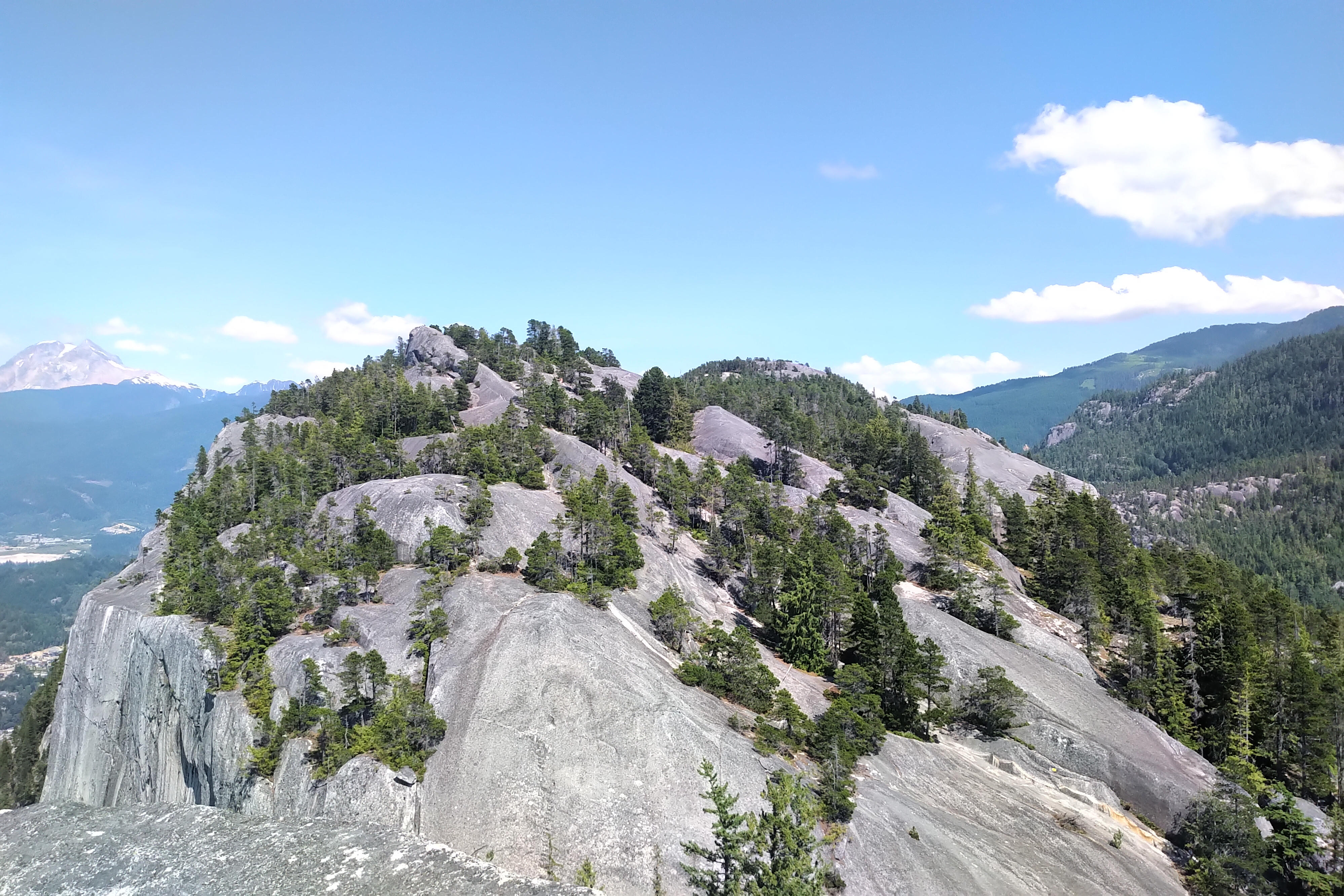 This is not a tale of backcountry legerdemain. There are three peaks of the Stawamus Chief, all roughly the same height: I did the southernmost, shortest one, which made for a pleasant afternoon hike. I was too gimpy and too flabby from my various layoffs to be ambitious, and started too late in the day to go slow and sweet up all three.

Of the three peaks, the southernmost is the most-hiked and has the greatest prominence. The central and northernmost peaks are joined by a relatively modest col, whereas going direct from the south to the central is for mountaineers. If one wants multiple peaks, one is best off starting for two and three, then bagging one on the way back if one so chooses. On the other hand, the south peak offers a superb view of the ascent to the second; immortalized, in cell-phone-camera quality, up there above the map.

By trail the peak is not severe and you might think the day-use permit system3, where hiking opportunities are gone before the casual hiker is out of bed, would deter the people who make Garibaldi such a misery. Children do this trail. Anybody who can rip off a Grouse Grind, as thousands do, will find it straightforward. Yet on my day a third of the hikers were toned, sleek mountaineers who no more need my words than a rock to the dome, a third were normies more-or-less in my class, and a third were in too deep. Squamish Search and Rescue gets so many customers in this park that they have started staking out the parking lot, and the park signs literally warn “this is not a walk in the park.” Even apart from the worst-case scenarios, there are multitudes of people having miserable trips and radiating that misery like the rap from their loudspeakers, taking seven hours over a three-hour hike, being rude and unpleasant through fatigue or general prattishness, getting into breakup-level arguments, and generally increasing world unhappiness. The despair when you tell somebody he’s still an hour from the peak, or the disbelief when you say the Sea-to-Sky Gondola is on a different mountain accessed by a trail you passed thirty minutes ago, or see a couple so ill-prepared for a real hike that the man is carrying the woman’s purse as she descends a moderate twenty-foot downscramble via an endless series of screams. I saw all these, and more, on one short Saturday afternoon.

Nobody knows what 1800 feet (about 500 metres) of vertical gain in a mile and a half is like until they do it. It is very like climbing 1800 feet in a greater distance, only more so. You are going up. You move forward surprisingly little. The wise man getting into a weekend hike now and again does his climbing on pleasant, longer trails before trying to bang it out all at once. Otherwise he has a bad time.

Conditions-wise, the trail itself is no challenge; indeed, it’s almost a miracle of engineering, with lovely regular stone staircases and perfect wooden ones blending into each other elegantly. Anywhere nature allows, and several places you think it wouldn’t, the staircases open up onto short landings or clearings so you may rest on your feet and recover your wits. The designers and maintainers of this elegant grey-tan ribbon on the side of a rock deserve medals.

But it’s a lot of staircases, with maybe a few hundred yards of mere inclined trail in toto over that mile and a half. The staircases only give out when you get into the rock and it becomes easy scrambling. Two thornier patches have chains, which are useful on the way up and I didn’t need on the way down. There are also two ladders. As a veteran of the West Coast Trail I consider myself experienced here, and these two are diamonds. Steel, straight, firmly-anchored, and above all short. One of them has room for only one foot at a time, which is fun, but limited exposure takes the sting out.

This style of trail may be too civilized for some. It has its little challenges; there’s no water, and some of the steps are easier than others. But if you’re hiking yourself into shape a bit but know you’re fundamentally up to this it’s nice and safe, and a brisk descent down staircases beats skidding down hill and scree any day of the week. Particularly for the climbers, for whose benefit signs warn visitors not to drop rocks off ledges, and who rush down the stairs with gear clanging at their belts onto a new adventure with a vigour that made me feel even less fit than I actually was. It’s all worthwhile, though. With the day use permits in place, I arrived at the summit to see only two other parties: a few women self-awarely Instagram influencing with each other, a couple others enjoying privacy behind a bush. Staying up for a few minutes more hikers came, and climbers arrived from all sorts of weird angles, but there was plenty of room to spend a few minutes spreading out, looking down southwest on Howe Sound, or north towards Whistler at Garibaldi, the Black Tusk and the Barrier (a much more imposing, fascinating feature from the Chief than ever I saw it in Garibaldi itself). I even read, for a time, in peace, and never felt I had to rush on and give others a turn. There was room enough for all.

Get up there now, before the passes go away, because if it’s crowded I bet it’s hell.

One reply on "A Peak at the Stawamus Chief"